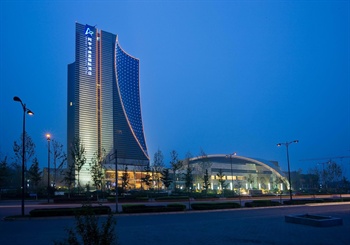 The Arcadia International Hotel (Aerkadiya Guoji Jiudian) stands east of Langfang Development Zone Conference and Exhibition Center, 12 km (7.5 mi) from the railway station.
Langfang City is in the central east of Hebei Province, by the Capital Beijing on the North, Tianjin on the East, Cangzhou on the South and the ancient city—Baoding on the West. Being situated between Beijing and Tianjin, and in the hinterland of Bohai Economic Rim, Langfang is well-known as “the bright pearl on the corridor of Beijing and Tianjin”, “the corridor (Lang) connecting Beijing and Tianjin and the lane (Fang) around Bohai Sea region”. In April 1989, Langfang was approved as the prefecture-level city under provincial jurisdiction by the State Council, which now governs two districts--Guangyang and Anci, two county-level cities--Sanhe and Bazhou, and six counties--Dachang, Xianghe, Yongqing, Gu’an, Wen’an and Dacheng. It covers an area of 6,429 square kilometers with the main urban area of 54 square kilometers. By the end of 2014, the total population of Langfang city has reached to 4,601,000, GRDP has achieved 217.60 billion yuan and total financial revenue 40.67 billion yuan.